Disclosure: We received two complimentary tickets to the park. All opinions stated, however, are genuine and entirely my own. 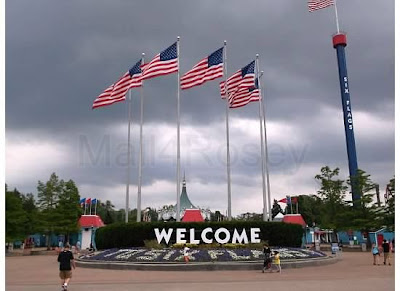 Seems like your favorite amusement park is always the one you frequented as a child, and for my husband that is Six Flags Great America. Every year his parents would pack up the three kids and make their way to the park, and it was a big deal.  Now my husband is 48-years-old and doesn't get excited much about amusement parks, but he sure did for this one.  Everyone noticed his unusually chipper early morning attitude as we packed up the car at 6 in the morning to head on over to Gurnee, Illinois (just outside of Chicago). He was excited to be returning to Great America after having not been there since he was a kid.  For the rest of us it was a first-time visit (it won't be the last). 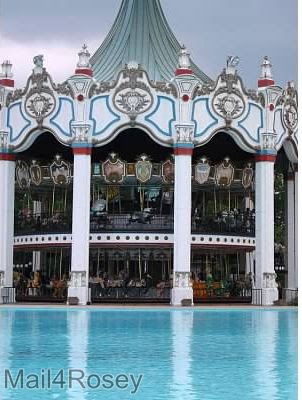 The first thing that struck me when I entered the park was the double-decker Columbia Carousel that stood ten-stories tall. I've never seen such a thing, and I really thought it was unique and very pretty! 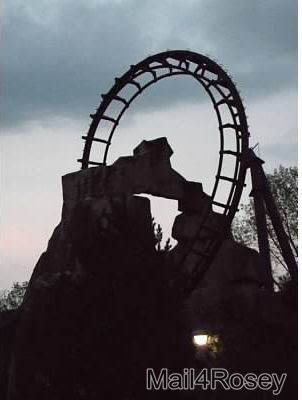 Great America was a lot bigger than I expected, and had a lot more things to do than I'd anticipated. And the roller coasters (always a family favorite), boy did they have 'em!!! You can see from the sky in the pictures that we were faced with an overcast day, and on and off rain, so a lot of the times the big rides were not running. That was perfectly okay though, because there were a lot of other things to do that didn't make you feel like you were 'settling' at all. 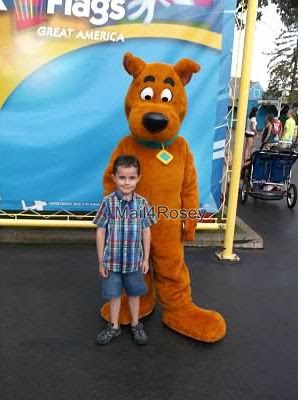 There were several kids' areas, and each one was unique, huge, and fun in its own right. There was Camp Cartoon that had different sections all themed to some of the all-time favorite cartoons like Scooby Doo, The Flintstones (woot! my favorite!!), and The Jetsons. Another children's area of the park (with shelter when it was raining) was part splash area, part climb/slide/play, part kiddie rides, and a huge karaoke stage for kids. My two children were oh so excited to get up on that stage and sing one of their favorite pop tunes to the world but right after they'd picked out their song it started to rain really hard, and my daughter chickened out because a whole lot of people came scrambling in. ;) Too bad too, 'cuz she's got a really great singing voice, and it's fun to watch when her and her little bro. duet.

Though there were so many things to enjoy, each one of us ended up having our own favorite.

My husband loved the Superman Roller Coaster better than anything else, hands-down.

My favorite ended up being the King Chaos ride because it was a concept I'd never seen. This huge chair that seated many took you high up into the air and then flipped you around and brought you back down, face first. My daughter and I rode this together, and she'd never seen anything like it either. I caught her coming off of the Superman coaster and got her on it before she could see what it did.  "What's this do mom?" Oh....nothing, just a little swing ride. hehehe


The teen's fave was the roller coasters, and when I asked her which one, she said, 'all of them!' No surprise there, she takes completely after her mama.

The little one, which really surprised me, loved the shows above all else.  In the one pictured above, he got the biggest smile when Bugs, Sylvester, Foghorn and Daffy came out on the stage, and then every time I looked at him he flashed me the same big, uncontrollable grin (which I loved seeing every single time).

The lines were great, the park was very clean, and the rides were fun. My only regret was that we didn't get to ride The Viper (a backwards-going roller coaster) because by the time we got around to it, the rain had completely shut it down. Just one mishap, and a good reason to go back next year, don't you think? :)

On the way out we finally took a ride on that double-decker carousel, and it was very relaxing, and pretty too because everything was lit up (we went to the top deck).

Great America allows you to end your night with iGnite Grand Finale, which was full of singing, dancing, lights, and fireworks too...the perfect way to wrap up the fun for the day.

I'm glad we took that trip to Six Flags, for us it was way overdue. I know Jen from The Adventures of Our Army Life went this year with her husband (you can read about her visit here). How about you? Have you been to Great America or any of the other Six Flags parks?